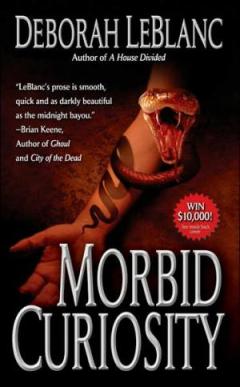 Not only will this be the first post for Women in Horror Recognition Month, but this will also be the first Fan Horror Level Spotlight we’ve done. Morbid Curiosity is the story of twin sisters, Haley and Heather, that lost there father to physical illness and mother to mental. They are shipped from Louisiana to their paternal grandparents in Mississippi. They loss of parents, friends, and lifestyle is too much for both of them, but more so for Haley. A popular girl in school, Karla, decides to help them out by showing them how she became popular: Chaos Magic. And like it’s name implies, chaos slowly takes over the lives of Haley and Heather.

One of the refreshing elements of the book is that it takes place in the southern region of the United States. While settings are becoming more varied, especially in the small press, there is still a dominance of northeastern settings in the genre. It is a subtle variable that can have enormous effect on the story. Each region of the country has there own way of doing things. One region’s reaction to a situation may be very different to another. The landscape and environment will have different options for choices of actions. Mid school year in the south is very different than in the north. There for, just that small change will give something for even the adamant fan something new to enjoy.

On the whole, though, I go to say that Morbid Curiosity rides the line that divides dark fantasy and horror. The dark fantasy aspects are that the over all action of the story is not so much of the scare as it is about the story of youthful hubris powered with magic. Magic is the key element in the story. Nearly every scene after the twins create their sigil is powered by magic. Psychology and mystery, which are usually in the fore of horror stories, takes a back seat to more of a plot line you could easily see in a YA urban fantasy. But horror it still is because the background cause of all if is still the battle of fears in the characters. While not in the fore as much in other stories, they are still there as the impetus for the responses of the characters to events. Haley fears loss of control of her life. Heather fears loss of her bond wither sister and being alone. Buck fears he will let down his granddaughters like he believes he let down his son.

Control is a theme that is strong through the story. It is also one of the reasons that bumped the book to the Fan level. Most of it it is over the control of life, either one’s own or another. Haley is willing to do a lot of horrible things for control of her life that she feels she lost since she moved in with here grandparents. We watch as a burgeoning sadist grows within her. It makes sense since the protagonist, Caster, is a complete sadist and hopes to turn Haley into a apprentice/experiment.

In conclusion, Morbid Curiosity is an example of a sub genre that hasn’t been noticed in horror that I would call Extreme Dark Fantasy. While not gory, like Extreme Horror, it does take the themes and conventions of dark fantasy to a beyond the boundary level.

One thought on “Women in Horror Month: Morbid Curiosity”